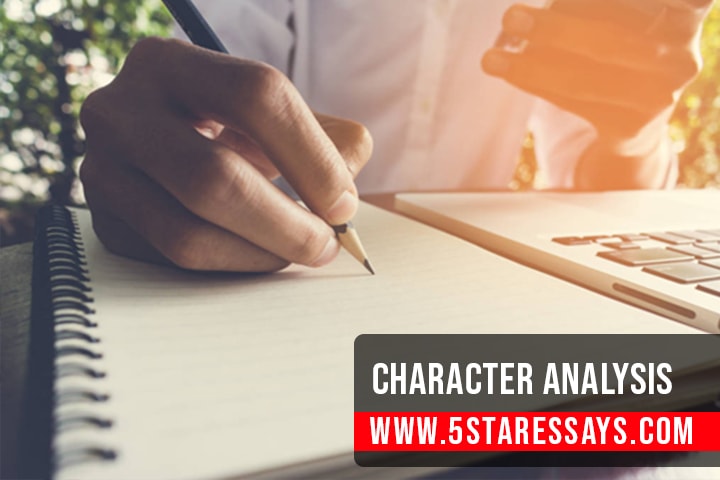 Most of the people consider writing the analysis of characters, a piece of cake. Their claims disappear as soon as they are asked to write an academic paper on it.

Writing a character analysis demands intelligence, skill and inventiveness, and not everyone is bestowed with such blessings.

It only gets difficult for those who are not familiar with its tactics and techniques.

Dive in and learn to write the most eye-catching, interesting, impressive and outstanding character analysis.

1. What Is a Character Analysis

To understand how to analyze characters, you need to explore what is a character analysis.

It is a “complex evaluation” of the characters of a novel or book. It analyzes both their role in the story and the problems faced by them throughout.

This kind of essay requires the key character to be analyzed with a very critical view and from all possible angles.

Give as much detail as you can.

Mention gender, age and appearance of the character that you are analyzing.

If the writer has not mentioned these details, conclude it on your own. You can assume the profession, age, class or society that particular character belongs to. Discuss their personality, behavior and relationships. Write it according to the story’s plot and background shared by the author.

Before starting your character analysis essay, you need to question,

You can develop a character analysis essay outline before starting the writing process.

2.1 Significance of Objectivity in Character Analysis

Do not use your personal perspectives.

It may affect the evaluation of certain actions or features of the specific character.

Your goal in writing a character analysis is to give readers deep details about the features of the character.

Students only describe the character according to the words of writer which is not commendable.

It is about describing all the details of the events that are happening in the story. Also, how the character in scrutiny is affecting them and being affected by them.

Here is a character analysis example to help you have a clear picture of this type of academic essay.

3. How to Write a Character Analysis

Writing a character analysis is a very interesting task.

You can enjoy being a philosopher, detective, or psychologist, all at once.

Use your critical thinking and intuition and guess character traits. Make sure that whatever you state is backed with solid contextual evidence

There are a few things to help you in learning how to do a character analysis essay.

3.1 Focus on Character's Motives and Actions

Think about all the reasons and motives that can force the characters to act in a particular way.

Focus on what can motivate their actions and how correct and ethical their behavior is.

Consider all the events that are not described in the story but could have happened in the childhood of the character.

3.2 Why It is Important to Analyze the Character's Sayings?

Focus on the dialogues of the character.

Think about the tone of the voice and verbal gestures.

Add personal attributes in the character that illustrate the it.

3.3 Pay Attention to the Types of Description

Know that, in the novel or story, there are two kinds of descriptions.

In the first type, the author explains a character, whereas in the second type other characters speak about the character.

Pay attention to these descriptions and try to see beyond obvious.

If you want to write an outstanding character analysis essay, you must understand the types of characters.

This character is negative and opponent of the hero.

The main character of the story.

Actions of this character, influence and drive the story.

Usually this is the main character, which is shown changing in a story.

Static characters sticks to its moral position under any, and every, circumstances and remains unchanged in the entire story.

A character which appears for a short time and has a very smart part in the story.

Any character that plays a major role in the story.

This type of characters stay for a long time.

They can be antagonist, protagonist or any other type.

Characters that are used just for creating the required atmosphere.

They only appear in the story to fulfill the requirement of the situation.

Don't forget that it is important for you to follow the structure instructed by your teacher or institution.

In addition, you can also follow the standard template which comprises of the following parts:

what the entire analysis of the character is about.

You can write all the information and details here, and reveal qualities of the character in a better way.

Give body paragraphs breaks, use lists and other markers.

Include your analysis in this part.

Give literary analysis of features, development and role of the character here.

Share your personal attitude towards the character and describe why it was important for you to make analysis about it.

If you have the freedom to choose the character, here are few amazing suggestions for you.

Here is a Hamlet character analysis example for your help.

Do you still find writing a character analysis difficult?

Do you think you'll lose your good grades?

If you need professional help, 5StarEssays is the best essay writing service that delivers quality work to assist students around the globe. They will deal with your write my essay request effectively.

Paper Due?
Why suffer?

CHECK PRICES
Too many academic deadlines on your plate?

We eat deadlines for breakfast! 50% off on all orders (limited time only)

Your first essay with us is FREE!
LEARN MORE

Your first essay with us is FREE!! Offer Ends: