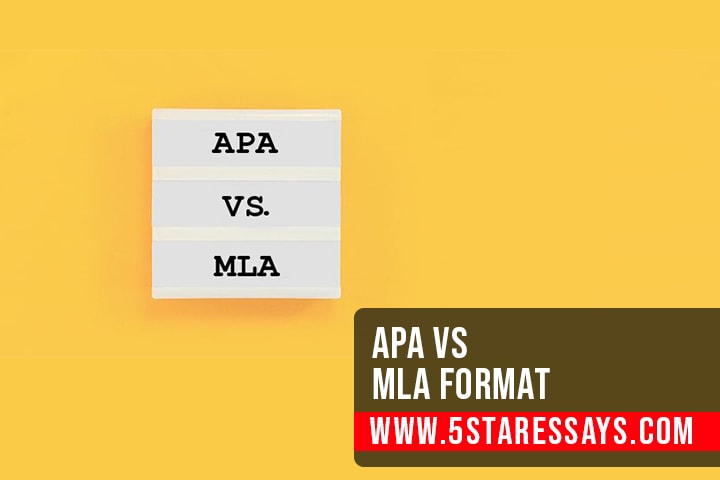 Working on a paper and thinking which formatting style to use?

Confused between APA and MLA formatting?

You are at the right place!!

APA and MLA citation formats are probably the most commonly used referencing styles.

1. What is a Citation and Citation Style?

Before moving forward with APA and MLA style guides and differences between them, you need to learn what a citation and citation style is. A citation is added into the academic papers and essays to refer back to the source of information and to credit the original author.

It includes the name of the author, date of publication, name of the publisher, year of publication, page number, in case of books, anthologies and journals, name of the journal, edition, DOI (Digital Object Identifier) and the online source from where the data is retrieved. A citation is important to avoid plagiarism and to add credibility to your academic work.

Universally, there are three main types of citation styles: APA, MLA and Chicago.

2. APA vs MLA - What are the Differences?

APA format citation is similar to MLA format in quite some things like both of them use font type and size, Times New Roman 12pt, margins are one inch all around and the paper is double spaced. However, where they have some similar aspects, there are a number of differences between them that could not be avoided. Learn and follow them completely if you do not want your teacher to minus your score.

APA style papers and essays have a separate title page that is formatted in the respective style. The main things to add in the APA citation vs MLA citation style title page are:

MLA paper does not require any separate title page and, generally, the author's name, instructor's name, department and the date of submission are mentioned on the first page of the assignment. The paper starts immediately after these details and with a centered paper title.

Though both the citation styles share some common traits, they do have some differences in their formats. The paper presentation in both the styles is the same as both of them have 12pt Times New Roman font size and style, 1-inch margin on all four sides of the paper and double spaced.

All the paragraphs are indented and the paper must contain proper, and accordingly, incites to credit the paraphrase and direct quotes. One of the main APA and MLA differences is that in the MLA, writers add endnotes and footnotes to give additional information. In APA style paper, no footnotes are added.

A major APA vs MLA format characteristic is the style of referencing that is used in both of them.

APA format vs MLA format citation will be included in the following way.

The references in the APA format is added in the 'References' page while the cited works in MLA are added in the 'Works Cited' page.

In both APA and MLA formats, the books' authors, year of publishing, publisher and place of publishing are added, but in a different order.

Online books citation differs in the way that the online source, the web link, is added into the citation so that it is accessible afterwards also.

For Books from a Database

Apart from hardcovers and print versions, there are many books that are available in the databases, line websites and online publishing sites and could be accessed online. For them, link to the main database is added into the reference.

For Websites and Blogs

For most of the students, online sources are a way to go. People now prefer and rely on digital mediums than print books and other sources. To highlight more of the APA vs MLA features, we are adding how to cite your online sources here.

Academic journals are often used by students to learn about new trends and studies and to stay up-to-date also. When adding journals in your paper, or study, make sure that you follow proper citation guidelines to ensure its flawless structure.

Our complete guide on MLA Format with sample paper and further examples will help you understand it further.

Besides being available in libraries, academic journals are available online as well. If you are here to look for a guide to know about how to cite online journals, follow the following structure.

Apart from print and online journals that you can find for your paper's assistance, to format a paper from a database, use the following methods.

Found a great quote or phrase? Great. Adding direct quotes and phrases and paraphrased content is a great way of supporting your research in social sciences. However, the added information must be cited and referenced properly.

For a Single Author

For APA in-text citation, the last name of the author followed by the date of publication and page number, in case of books or journals and specific parts of a study, is presented in parentheses.

In case the author's name is mentioned in the sentence, just add the year in front of the writer's name and the page number at the end of the sentence.

For MLA style, the last name of the author, followed by the page of the book or journal, if any, is presented in parenthesis.

"Darwin's theory of evolution is flawed and inconsistent. (Shawn 15)."

If the author's name is added to the sentence then the page number is mentioned only.

Shawn (2015) argues that Darwin's evolution is flawed and inconsistent (15).

In APA format, all the last names of the authors and year of publication are mentioned in the first in-text, separated by a comma and ampersand.

Greenhouse effect is one of the key players in increasing global warming (Williams, Smith, & Shaw, 2015).

For every other subsequent in-text, only the first name is added, followed by et al and the year of publication.

Global warming is affecting the environment on a large scale can be minimized by reducing our carbon footprint (Williams et al., 2015).

For MLA paper citation, you do not need to add and mention all the writers in the first intext. Only the first author is mentioned while the others are cited as et al followed by the page number.

By minimizing the use of plastic and non-biodegradable substances, the environmental hazards of carbon and global warming could be minimized to a large extent (Williams et al. 50). In case the authors are mentioned in the sentence, only page number will be mentioned at the end of the sentence.

For Sources Without an Author

Coming across a source without any author is probably the most frustrating thing for a student but it is common when you are working with digital images, movies and videos, dictionaries and encyclopedias and online web pages where authors are not mentioned.

In APA, in case you do not find the author, add the first few words of the study and the year of publication.

According to a new research, human cloning may be the future of human advancement ("Genetics and Genes," 2014).

If you have mentioned the title of the study in the content then add the year of publication only.

According to "Genetics and Genes" study (2014), human cloning may be the future of human advancement.

In case of no author name in MLA citation, the name of the work is used in parentheses and quotation marks. If the title is too long, shorten the title but make sure that the words are the same as added and mentioned in the Works Cited.

"From the moment you hold your baby in your arms you will never be the same. You might long for the person you were before, when you had freedom and time and nothing in particular to worry about" ("The Last Time").

For online sources, in both APA and MLA, the same format of author's name and date of publication is followed. In case nothing is mentioned, just add the title of the article, or paper.

Make sure that you follow the right in-text citation style.

2.5 APA vs MLA Headings and Subheadings

This table is just for reference and to give you an idea only; you should use whatever works best for you but make sure that it is consistent throughout the paper.

APA format has a well-defined headings and subheadings system; because this is followed by the scholars of scientific studies and they use headings and sections to organize their work, this format has a set guideline for sections.

A usual APA format for headings and subheadings is:

When adding headings and subheadings in your APA style paper, consider these and follow the structure carefully.

None of the APA or MLA calls for bibliography as a must. They treat References and Works Cited pages as thorough references. However, if you do need to add the bibliography, follow the citation structure as prescribed by your respective paper's citation format.

So, which format is better to choose and when?

APA is more for scientists and MLA is for humanists.

Keep in mind that it completely depends on the scenario. If you are writing about fictional work, MLA is appropriate to use.

If you are writing short publications such as academic articles then it is appropriate for you to use MLA.

Still confused? It is completely normal to get confused with all these technicalities. We are here to help you with that.

5StarEssays is a professional essay writing service delivering quality and cheap research papers. We are always here to help you understand your papers in a better way and to give effective and timely answer to your 'write my essay' request. We know that you need fast, reliable and affordable help and we are here to provide you academic assistance.

How can we improve it?
Citation Formats