Are you wondering “how do I write my essay”? View this example essay about Physician Assisted Suicide:

The issue of Physician Assisted Suicide also known as euthanasia has significant legal and ethical implications. There is a delicate balance between voluntary and involuntary physician assistance. There are associated policies and legal precedents that have in some ways have shaped the framework of imminent discussion. Dr. Jack Kevorkian was a central figure to the right of the physician to assist in euthanasia. It became a question of significance especially in nursing facilities and acute care hospitals (Darr, n.d.). The central question is does this constitute an extension of the physicians role as comforter?

Based on the accumulated research and subsequent legal implications, this paper is opposed to euthanasia. One of the primary concerns is the inevitable modification of the role of physicians who assists in euthanasia. There is concern that they will become thanatologists. This is essentially a medical specialty focused on patient assisted death. As thanatologists the patient- provider trust will erode, since palliative care will no longer be the focus.

One pragmatic example of palliative care gone amiss is Dr. Harold Shipman a general physician practicing in Manchester England. To date during his 23 years of practicing medicine he has been linked to assisting in approximately 250 patient deaths. Additionally the often ignored trauma on physicians is evident in the fact that he required psychiatric and drug treatment after his first patient expired. This legal practice of euthanasia once common practice can essentially reduce the quality of “life care.” It places the institution and the physician in the unenviable position of interpreting when a patient’s life should end, which is subjective at best (Darr, n.d.).

This report is concerned with legal precedents that have long been established. One example is a 1994 approved initiative (Death with Dignity Act), in Oregon. Implemented in 1997 this act essentially permits physicians to provide lethal medication to a terminal patient. One requirement is that the patient must have a life expectancy of less than 6 months. Additionally the patient must be legally considered an adult (18 yrs. old) and mentally capable of such a decision (Ardelt, n.d.).

Although opposed to physicians operating as thanatologists, the institutional process established by the Death with Dignity Act is admirable. In addition to the aforementioned requirements a patient must accomplish the following in order for the physician not to be subject to criminal prosecution:

Should legal provisions continue to expand in various States careful consideration must be given for susceptible patient populations. In Oregon, 87% of those patients exercising their legal rights to euthanasia were receiving hospice care. Although this percentage is alarming it could be a natural occurrence that is inevitable in this patient population. Meaning the process of euthanasia could in fact be considered “mercy killing” for the terminal, by advocates. Even with the Death with Dignity Act the mortality statistics must continually be monitored. Enforcement of this legal process is critical to ensuring that each patient is afforded every opportunity to have a rewarding and comprehensive life (Gill, 2009).

What about better end of life care?

Should State’s continue to adopt policies legalizing euthanasia then institutional protocols are the only safeguard. However, one viable alternative is the enhancement of end of life care. Advocates of this position argue that individuals in an environment of love and support would respond more favorably to extended life. Additionally, expert clinical support by proficient staff would result in better outcomes. By focusing on greater proficiency of the healthcare team the focus remains palliative care. This perspective is countered by statistics such as 14 out of 35 euthanasia requests were motivated by chronic pain. Additional factors driving patient requests include secondary issues such as shortness of breath, extreme fatigue, diarrhea and nausea. This is further supported by a Meier study showing 42 percent of patients requesting euthanasia due to secondary discomforts (Gill, 2009).

In conclusion the reality is that euthanasia as a standard legal practice may be unavoidable. Given the historical legal precedent established in Oregon and other States, it appears only a matter of time. However, the paper is opposed to the physician operating as a thanatologists, as opposed to a provider of palliative care. This is primarily due to the dualistic position left for the provider. If the provider is focusing on improving the patient’s end of life care then death by natural cause is legitimate. In other words the Dr. is not focusing on anything outside of providing high quality care.

Once the provider is responsible for subjectively determining when a patient is in too much pain to live it establishes a slippery slope. It opens up the floodgates for legal interpretation of what constitutes terminal conditions, and ethical implications of quality care. It also puts into question the mental state of such a patient. For example, if a patient is in so much pain that it affects their mental stability then how can they make end-of life decisions?

Often the standard approach for determining a patient’s mental condition is the Beck Hopelessness Scale (BHS). In this assessment there are twenty Yes or No questions. One example is, “I can look forward to more good times than bad times (Gill, 2009).” Although the patient may respond negatively during one point of care, is that a permanent mind state? Perhaps with enhanced quality care there response could eventually change.

MICHAEL B. GILL. (2009). Is the Legalization of Physician-Assisted Suicide Compatible with Good End-of-Life Care?. Journal of Applied Philosophy. 26 (1), 27-45. 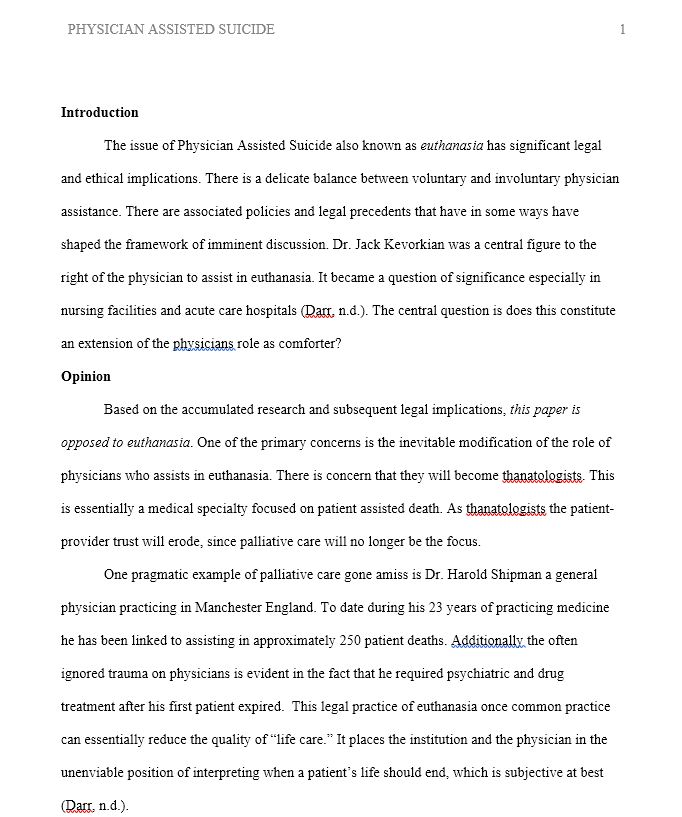