Looking up “how do I write my essay?” This example essay on ‘Why People Go to College’ can serve as great help:

Historically college has been viewed as a precondition to achieving social and economic stability. It has even been referred to as an economic imperative by President Obama. One of the most compelling factors has always been the earned income of college graduates comparative to high-school attendees. Although there is general consensus on this fact factors such as institution, area of specialty, graduation status, and chosen occupation are factors. This paper will address various reasons that people attend college and the anticipated (ROI) return on their investment (Owen, and Sawhill, 2013).

To gain a quantitative and qualitative understanding of the investment return is somewhat challenging. However, various studies indicate an anticipated 10 percent return for a student attending an additional school year. Therefore, let’s assume the median earning is $40,000 for a 25-34 year old with a high-school diploma. 10% of median earning is approximately $4,000. So for an individual attending an additional four years of school (typical bachelor’s degree) that would be an increase of $16,000. For the same 25-34 year old college graduate we could assume an annual income of approximately $56,000. The estimate for an associate’s degree is approximately $7,000-$8,000 (Owen, and Sawhill, 2013).

In order to comprehensively assess the value of an education the investment must also be considered. Therefore if someone goes to a private or Ivy League school for example their net benefit of attending may be lower based on the projected earnings minus the expenses. Another factor to consider is the opportunity costs of attending college. Usually there are other opportunities during the educational process that a student will not be able to consider due to time constraints. Therefore the opportunity costs for a four year degree are approximately $54,000 according to a recent report (Owen, and Sawhill, 2013).

Hamilton Project research contends that there are long and short term benefits to attending college that must be considered. For example, in the short term a 23-25 year old with a college degree may realize a $12,000 earnings increase. However, over the course of the next 25 years the projected earnings could grow to $46,500. Cumulative earnings for a bachelor’s degree could be $570, 000 and for an associate’s degree $170,000. If the cumulative total of the tuition + the opportunity cost is $102,000 then the lifetime earning is worthwhile. Especially when considering a bachelor’s degree, as there is a significant earnings increase (Owen, and Sawhill, 2013).

Below there is a graph that outlines unemployment rate relative to education level and average earnings.

Source: Why Go to College, n.d.

The graph reveals several interesting and important trends. The first trend is that there is a significant decline in unemployment rate relative to educational level. So for example just by obtaining an associate’s degree the unemployment rate is cut in half. One assumption relative to that trend is that someone with an associate is more marketable and has a broader skill set. Therefore the graduate with the associate’s would be more marketable. By obtaining a Doctorate or professional degree the unemployment drops to less than 3 percent. This would inevitably be attributed at least in part on the level of specialization obtained with such an advanced degree.

Another relevant trend is the earning potential that increases incrementally based on educational level. For example going from an associate’s degree to a Master’s degree equals a significant financial boost. Even advancing from a Master’s to a Doctoral program equals a $20,000 advance in annual earnings. Taking into consideration the opportunities for job promotion, the cumulative lifetime earnings at the Bachelors through the Doctoral level are substantial.

The (IPEDS) Integrated Postsecondary Education Data System is inaccurate in its metrics relative to graduation rate. This is due to the fact that 40% of part-time students are not counted nor are transfer, low income, and remedial student’s included statistically (Time is the Enemy, 2011). Assuming a correlation between school funding and graduation rates accurate statistics becomes vital.

One report effectively captured data from 33 States using the Complete College America/ National Governors Association Metrics tool. For States not utilizing the referenced metric tool assessing the educational needs of students is difficult. Critical questions such as “Which remediation programs successfully help students”, are important. In fact it could be argued that such information should be a key driver in the formation and establishment of future educational programs and protocols. Metrics are divided into two categories outcome and progress. Outcome metrics assess degrees awarded annually, graduation, and transfer rates. In contrast progress metrics assess non-traditional categories such as remediation, retention, and course completion dates (Time is the Enemy, 2011). Also important is that a student has a clear picture of what they want to do and why. One report indicates that approximately 53% of students graduate from the school where they initially started their educational studies (Asher, 2010).

The report ended by outlining 5 critical strategies States should evaluate.

There are case studies of educational institutions addressing the needs of the non-traditional student. For example in New York there is an (ASAP) Accelerated Study in Associate Program. The program is part of an effort by the City University of New York to provide value to the time-strapped student. This model of block scheduling, and student cohorts by major has proven to be an effective approach. The results of success are self-explanatory. Currently there is a 300% increase in graduation rate comparative to individuals not engaged in the ASAP program (Time is the Enemy, 2011).

In Tennessee there is a statewide strategy to address the needs of the working student. There are a combined total of 27 Tennessee Tech centers and they boast a 75%-100% graduation rate. The other strategy that has been significant is the enrollment in an entire program as opposed to individual classes. It enables students to move seamlessly through the program without worrying about course availability. The predictability of the schedule also makes planning other life needs (i.e. work) easier (Time is the Enemy, 2011).

What this reveals is that college success is not something that begins in college. In fact foundational principles established in high school lay the groundwork for collegiate success. For example study habits developed in high school are carried over into post-secondary studies. Even a student’s psychological expectations of success will often affect the outcome. It could be argued that race, social status, and background are all factors that can be overcome with the proper foundation.

In fact it is critical that a student answer the “Why attend College Question”. In answering that question they lay the framework for the establishment of personal goals. Then when they are going through their post-secondary studies they are able to remain consistent regardless of the challenges. As mentioned in the report the typical student is non-traditional. As such, a student may need to work and juggle other responsibilities. In this instance the more organized they are, the greater their success level will be.

In conclusion it is important to once again reflect on the term “economic imperative” referenced in the introduction. The term imperative creates a sense of urgency. Reflecting on the financial disparity between those with a high school and collegiate degree a significant gap exists. So on the individual level there is an established ROI both in the short term and the long-term. Even when calculating opportunity costs it is worthwhile for the student to take that time and gain new skills and qualifications.

It is equally important for the Government to be engaged in the process of education.

This includes capturing relevant data to effectively track student success. The acquired data is also useful for shaping future initiatives and programming. By fully understanding the makeup of their student population they can creatively meet that student’s educational needs. When dealing with remedial student’s it is important for them to get that student back on track. Finally from a broader perspective there is societal value in each individual gaining new skills. The better educated each member of society is the better equipped that society. The better equipped the society the more innovative the contributions are that originate from individuals and collective groups. This ultimately increases the earning capacity of a nation.

Finally, members of the Complete College America Alliance have specific educational goals. Through 2020 they want statewide and campus-specific goals that are attainable. Additionally they don’t just want the information available at the local or State local they want it broadly accessible. The formation of best practices will enable there to be consistently excellent outcomes. Finally when applicable, using captured data to develop innovative educational plans for the future (Time is the Enemy, 2011).

"Why Go to College?...how about to Get a Good Job!" Studentaid.ed. United Stated Department of Education. Web. 10 Nov. 2014. <https://studentaid.ed.gov/sites/default/files/why-go-to-college.pdf>. 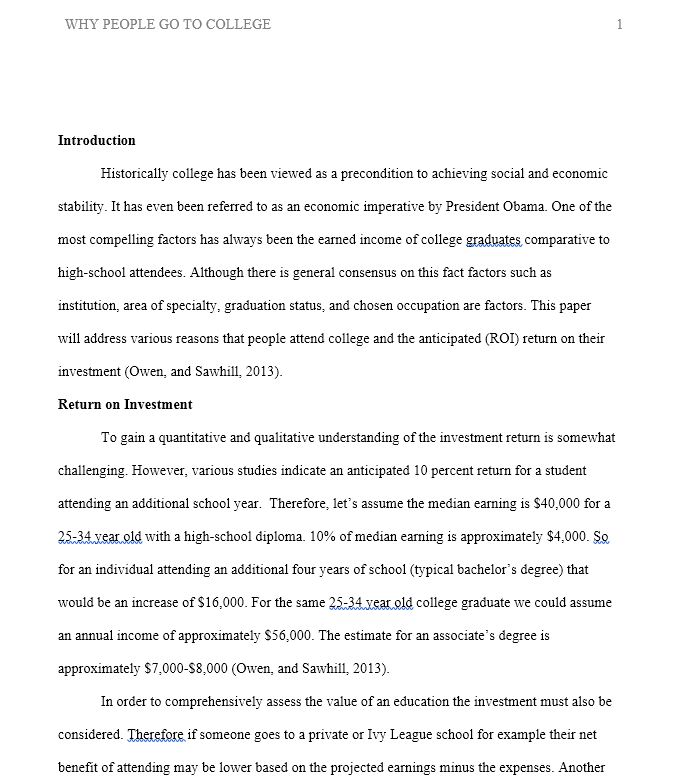