The death penalty has long been a polarizing issue both domestically and internationally. However for the purpose of this assignment discussion will focus on problematic issues domestically. One of the principle issues is the intolerant and disparate use against those considered underprivileged and members of a minority group. The frailty of humanity inevitably creates risk of executing those who are not guilty.

Another critical issue is the substantial costs of housing death row inmates. The criminal investigation, trial, and appeals process are often protracted. Therefore the associated costs are often difficult to justify. Further, capital punishment does necessarily function as a deterrent. One example is the fact that in 2008, fourteen states without capital punishment still registered low homicide rates.

This report will seek to examine the pros and cons of the death penalty. Further, this report will argue for the eventual elimination of the death penalty as a punitive measure. Problems include unpredictability of execution outcomes, associated expenses, and accuracy of sentencing. Collectively these issues make this an unappealing solution. The graph below reveals that California, Florida, and Texas combine for 47% of total Deaths by lethal injection.

This paper will study the problem of the Death Penalty from an economic, legal, and moral perspective. The paper will first discuss how the Death Penalty currently functions, and why it is such a costly and divisive issue. It will also address the consequences for erroneous handling of cases receiving the death penalty sentence. Next the paper discusses three policy proposed by several states including Alabama (HB 216), Florida (HB 4011), and Missouri (HB1855). Also, it will analyze the pros and cons, the potential strengths and weaknesses of each solution. The paper will conclude by offering some personal observations on the problems of the death penalty.

Research of the Problem

The framework for the death penalty was initially established in the U.S. Constitution. According to Article 3, Section 2, Clause 3 (ratified September 17, 1787), Criminal trials (except impeachment) shall occur in the State where the crime was committed. The method of trial shall be by jury. Further, the Fifth Amendment (ratified December 15, 1791) assures that charged individuals receive consideration relative to life, liberty, and property with due process. Additionally that same individual shall not be forced to testify against themselves in the resultant trial.

Also, the United States Attorney’s Manual (Title 9, Sections 68-69) addresses death crimes associated with criminal activity. Such criminal enterprises include Federal drug felonies that lead to the intentional killing of another. This legal precedent was part of the Anti-Drug Abuse Act of 1988. Further there was a Federal Death Penalty enacted in 1994. Critical to this was the establishment of constitutional measures for imposing the death penalty for sixty felonies within three broad categories. Those criminal offense categories included the following:
murder, espionage and sedition, non-homicidal drug-related transgressions.

One of the fundamental issues related to the death penalty is the associated costs. According to one report, the cumulative cost to execute one individual (including death row) is approximately $10 million. This same budget could hire approximately 200 police offers and related “crime fighting” technologies, placing them in high crime areas. Another issue is the unfortunate execution of innocent individuals. One report estimates that at least 135 individuals have been exonerated from the death penalty.

One proposed statute by Alabama is the HB 216, SB 194. Central to this legislation is the establishment of a streamlined appeal process. The objective is to mitigate associated costs for States. For example, in California an estimated $137 million dollars is spent each year on the death penalty. This is noteworthy since there has not been an execution in three and a half years.
Additionally, in Florida there is an estimated $51 million dollar spent each year on the death penalty. In Maryland, five executions during a five year period would cost the State approximately $37 million per execution. Finally to show how exacerbated the issue is, New York and New Jersey spent $100 million on a death penalty program that saw no executions. This led to the eventual elimination of such programs due to profligate expenditures.

Anticipated benefits include fiscal savings due to the streamlining of appeals processes and various legal proceedings. Additionally, the number of inmates sitting on death row for years would inevitably be reduced. However, streamlining the appeals process could adversely impact certain death penalty cases. In situations where an innocent individual could have been exonerated, perhaps they will now be wrongfully convicted and subsequently terminated.
Another proposed statute by Florida is HB 4011. This legal proposal efficaciously passed legislature in May, 2014. This is one of the laws that would repeal the death penalty. The significance is that it forces the State to seek alternative methods of deterring crimes related to the death penalty. It benefits those criminals who otherwise would have been put to death by extreme measures such as lethal injection. It allays associated costs for lethal injections and focuses on alternative castigatory options.

From a Global perspective, this proposed legislation would mirror an International approach. In 2010, the High Commissioner for Human Rights (OHCHR) adopted a resolution that progressively limits States use of the death penalty. This is obviously applicable to those States that either still utilizes the death penalty or could seek to reintroduce it.

A final proposed legislation is that from Missouri (HB1855). The proposal focuses on setting faster execution dates (Death Penalty Information Center, 2014). This is important because of taxpayer income that spends an additional $117 million per year seeking execution of those on death row. The proposed legislation would benefit the State in mitigating issues like overcrowding and also assist in associated cost reduction.

The strongest proposal appears to be that which would repeal the death penalty. Although disputed public support for the death penalty is inevitably on the decline. This could be attributed to the public’s perception of issues with the death penalty system. According to Victor Streib, a death penalty specialist, flaws in the system are continually exposed. Most specifically, it is important to recognize fiscal strains that state and local governments must address consistently. Costs are evident in capital trials, appeals, and post-conviction challenges.

Another issue that would be mitigated by repealing the law is unjust execution. One such example is Cameron Todd Willingham, who was convicted in 2004 of the deaths of three children. The forensic testimony that aided in the conviction is now being called into question. There have also been questions pertaining to the consistency of dealing with those who have mental retardation. Juvenile offenders and child rapists are exempt from execution according to the Supreme Court.

Also there is the issue of inhumane treatment of U.S. death row inmates. Typically, it is not unusual for them to spend nine years in a 6 by 9 foot isolated cell. They often are not provided ample opportunity for exercise, visitors, or substantial human interaction. Given the nature of lengthy legal procedures, such physical and psychological mistreatment is considered torture.

The European Court of Human Rights has coined such treatment the death row marvel. One example is the case of Jens Soering a German National convicted of murder in Virginia. Soering fled to England. During that period the European Court considered the extradition appeal. They contended that U.S. extradition would breach Article 3 of the European Convention on Human Rights. Soering was subsequently returned to the U.S. but only after the death penalty was removed as probable punishment.

Also, the American Civil Liberties Union argues that the death penalty encroaches upon the constitutional ban against cruel and unusual punishment. Within the framework of their argument the due process and equal protection of the law are mentioned. Therefore their opposition to capital punishment is primarily due to moral, pragmatic, and constitutional reasons.

The weakest proposal appears to be a streamlined appeal process. One of the most difficult aspects of this proposal is the appropriate implementation. A critical question would be how specifically to streamline a legal process while simultaneously ensuring individuals receive an appropriate trial by jury. When assessing an individual’s Fifth Amendment rights, the key phrase from constitutional language is “due process.” By streamlining the appeal process there is no guarantee that the Fifth Amendment would be appropriately upheld.

The good news is that there are trends showing a sharp decline in capital punishment.
In 2013, the death penalty saw a significant drop in several noteworthy categories. For example, there was a 10 percent decline in Executions (43 to 39). Also, only 9 States were responsible for deaths including Texas, responsible for 59% at (16) and Florida (7). Additionally, 33 cases with execution dates received stay orders. To further emphasize the significance of the decline in 1996, there were 315 new death sentences compared to 2013 with approximately 80 death sentences.

In closing, the issue of the death penalty will continue at some level to be a polarizing issue. It is fundamentally viewed as both a deterrent to crime and an inhumane act. How to delicately address this seeming dichotomy is something that States and Government will continually need to address in the future. However, it is important that Government does so from a perspective that is fully informed. This means looking at all pertinent implications. Implications are not just related to the process of the legal system, or the economic ramifications. Implications are also related to the human element. How are human beings treated during the process? These types of questions will ensure that their constitutional rights are continually upheld. 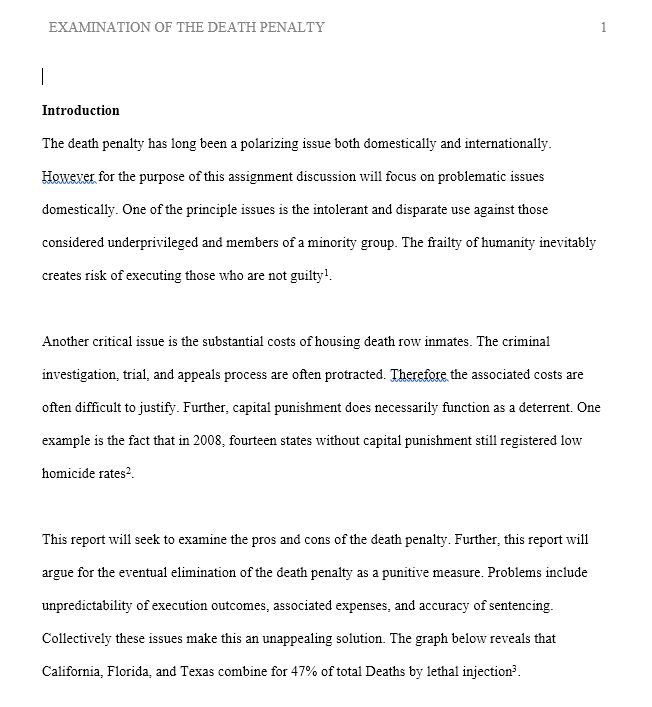