Disclaimer: The essay below has been completed by our essay writer for research assistance. Essay writing services are provided to students in specific fields, with authorship and copyright of content attributable to them.

There are specific instances when the benefits of abortion far outweigh the implications relative to the child. In reflecting on Roe V. Wade the ability of a woman to go through the procedure of abortion remains a fundamental right.

The issue of abortion will be assessed by analyzing how the issue has historically played out in the United States. First it is important to note that Roe V. Wade established the legal precedent for abortions to occur. Additionally, there are certain facts relative to abortion that would indicate the necessity of States removing any barriers for the procedure.

Fact #1: Roe V Wade was established in 1973. Since its inception more than 53 million legal abortions have taken place in the United States. This is an average of approximately 1 million abortions occurring each year (ProCon, 2004).

Fact #2: Even Religious organizations like the Catholic and Lutheran Churches that organizationally oppose abortion are shifting. There is a fundamental shift at the individual level where approximately 50% of Lutheran’s and Catholics support legalizing (ProCon, 2004).

So what do these statistics reveal? Well a careful analysis of fact #1 reveals that abortions are occurring annually at a significant pace. Therefore if States place barriers to abortion then there are unintended consequences. The most important unintended consequence would be the State encouraging women to explore illegal and unhealthy approaches to abortion. Fact #2 reveals a shift in public perception even in religious organizations that have historically been staunchly opposed to abortion. Fact #3 reveals that there are minimal risks for the women’s wellbeing when considering the implications of an abortion.

I feel that the issue of abortion has been a divisive issue unnecessarily. Often in assessing the issue of abortion the focus is on the unborn child. There is infrequent and insufficient focus on the zones of privacy afforded a woman. I am inclined to support the ideology of Supreme Court Justice Sandra Day O’Connor. In her 1992 decision in Planned Parenthood V. Casey, she talked about a woman’s afforded rights. Central to her philosophy is the idea that a woman has historically contributed to the economic and social welfare of society. Her ability to contribute significantly has been based at least in part on her ability to control her reproductive life (ProCon, 2004).

Implicit within this statement is the fact that removing from a woman that inalienable right redefines her sense of power regarding her choices. If we redefine or cause a woman to lose certain inalienable rights then we create an unintended precedence. This unintended precedence is one where now we as a society determine what defines a personal zone of space and an individual’s rights. Once we set such precedence then we open the door for other legal rights to be challenged.

Some people may counter that personal right by calling abortion murder. This is an opinion and clearly intended to create an ethical precedent removing a woman’s rights. For example when you look at the federal Unborn Victims of Violence Act, it seeks to punish those that intentionally destroy or attempt to destroy a life. This has created a model or precedent that has been followed by 38 States. Now I disagree with a woman killing a baby just for the sake of killing it. If for example a woman wanted a boy and found out she was pregnant with a girl then that would be unmerciful to simply destroy the child. The fact is there are many adults and families that are unable to have children. So rather than kill the child the woman could give the gift of life and hope to the child and desiring families.

However, there is the other side of the issue where a woman has conceived and there are potential negative implications. One scenario could be a woman who is underage and lives in an impoverished neighborhood or country with unsanitary conditions. In this situation having the child could create greater health and economic hardship for the young woman.

Another scenario would be if a woman was raped and conceived under duress. A third scenario could be a woman who has tested positive for HIV and does not want to transmit it to her unborn baby. This would be especially compelling from an ethical perspective because I feel that in this scenario the woman is showing mercy. The woman could transmit HIV to her baby either during pregnancy, vaginal childbirth, or through breastfeeding (US Dept. of Health and Human Services, n.d.).

At the beginning of the personal evaluation I noted that the issue of abortion is divisive unnecessarily. The reason that I feel this way is because there is no one size fit’s all approach. There are going to be instances where abortion makes more sense than others. To restate my thesis point, there are specific instances when the benefits of abortion far outweigh the implications relative to the child. Therefore the States and Government need to first ask who is the primary stakeholder in the issue? I feel the primary stakeholder is the woman and the unborn child is a secondary stakeholder. Unless as a society we begin to calculate birth date pre-conception then we cannot ethically indicate the rights of a human being at the pre-birth stage. Even the US Census does not identify fetuses in its statistical data (ProCon, 2004).The interpretation of a fetus experiencing pain is not a sufficient or viable justification to take away a woman’s immutable rights.

A question to those that oppose abortion is “would your opinion change if more women you personally knew died during childbirth?” Would you still feel that the pain that the fetus feels should take precedence over the needs of the woman? As a society it is easy to establish moral precedence if the issue does not personally impact you directly. While I am personally thankful for the gift of life there are certain instances where I would not have wanted to be born. The most compelling instance is if my birth mother had contracted aids and would subsequently transmit it to me. I have seen the suffering of those with aids and unfortunate instances of death. It is one of the most tragic and difficult things to observe.

Finally, the issue of what laws mean is noteworthy. Creating laws has never eliminated society from exercising judgment and applying ethics. So forcing a woman to make such an important decision under duress is unfair and unethical. What makes more sense is to be preemptive and provide counseling so a woman knows her rights. After counseling then a woman is empowered to make informed and ethical decisions. Is it more ethical to force a woman to make a decision that she feels is unethical? In other words if the woman feels that it is unethical to have the child based on her interpretation of the events surrounding birth shouldn’t she decide? 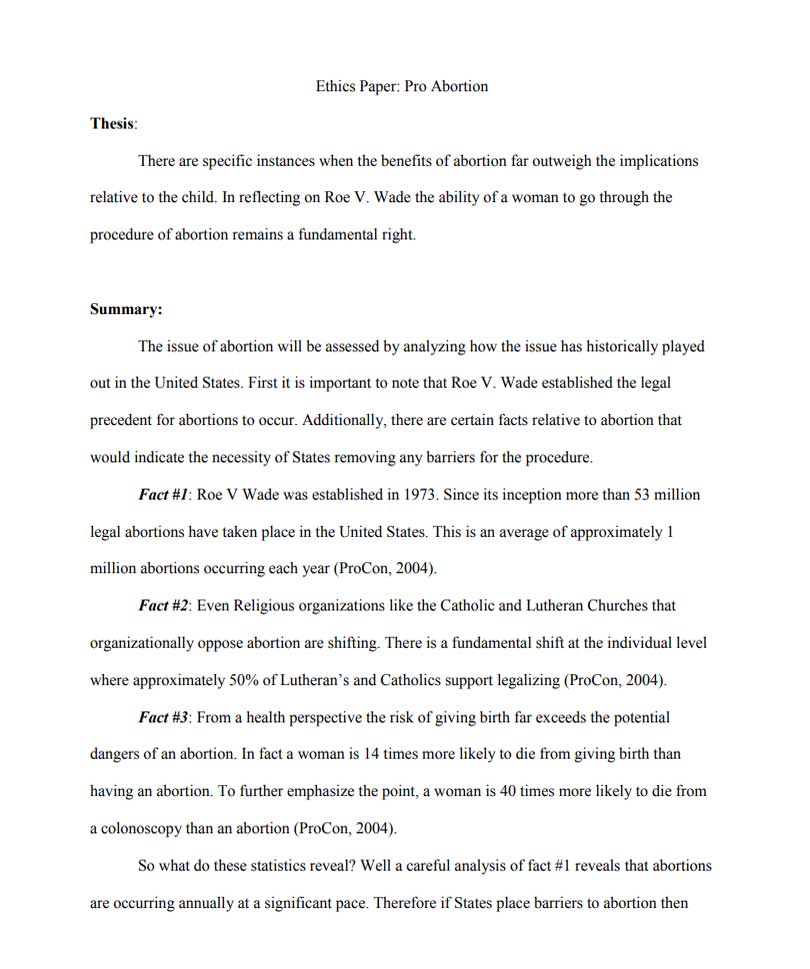